No checkout? The future is here!

Amazon .com Inc. brings exciting solution for shoppers in hurry. In Seattle, Washington the company introduces the world's first grocery store without checkout lines. At least how we know them today.

The new system allows users take whatever they want from the store without scanning or otherwise manually building up the list of purchase. It all happens behind the scene on-line.

According to Jing Geo, Bloomberg the company is testing the new system at what it’s calling an Amazon Go store in Seattle, which will open to the public early next year. Customers will be able to scan their phones at the entrance using a new Amazon Go mobile app. Then the technology will track what items they pick up or even return to the shelves and add them to a virtual shopping cart in real time, according a video Amazon posted on YouTube. Once the customers exit the store, they’ll be charged on their Amazon account automatically.

The concept store and automated checkout mark Amazon’s latest attempt to upend the grocery business. The company began experimenting with fresh food in 2007, when it started AmazonFresh, a delivery service now active in 16 U.S. markets. Amazon has since started opening pickup centers where shoppers can fetch their web purchases. Perhaps recognizing that many people remain reluctant to purchase fresh food online, sight unseen, the company is now testing what looks a lot like a convenience store.

“Most people still have two requirements,” said Forrester analyst Brendan Witcher. “One is, ‘I want something today, I don’t want to wait.’ Number two is ‘I want to touch and feel the product before I commit to it.”’

So if the Amazon Go concept works, will the company build small grocery stores in cities all over the country? Amazon isn’t saying. But some analysts envision a combination pickup center, fulfillment warehouse and small grocery store. After all, Amazon is already building urban warehouses, including a 50,000-square-foot facility in midtown Manhattan, that handle same-day deliveries to local customers.

Selling fresh food is a strategy long employed by retailers to boost foot traffic and get people to buy more stuff. 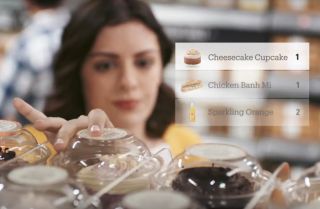 Amazon employees are testing out the 1,800-square-foot store on the company’s campus, where they can buy ready-to-eat breakfast, lunch, dinner and snack options as well as grocery essentials from bread and milk to artisanal cheeses and locally made chocolates. Also available: Amazon Meal Kits, containing all the ingredients needed to make a meal for two in 30 minutes.

The Amazon Go store is just part of Amazon’s broader retail strategy. Another format the company is considering is a larger shop that also has a curbside pick-up component, according to the Wall Street Journal. If this concept pans out, Amazon could potentially open 2,000 locations, the Journal reported, citing people familiar with the matter. That’s similar to an option being developed for customers to pick up items at Prime Now fulfillment centers